68 starters, only six females of them, in the preliminary round and eight participants in the Masters on two days, the schedule for the 26th German Tree Climbing Championship was tightly timed. The competition days beside a lake in Ingolstadt, Bavaria, were correspondingly long. The starters fought their way through the challenging stations in almost the best climbing weather and there were some surprises for the Masters participants. In the end, the favourites showed their strengths and deserved to succeed. 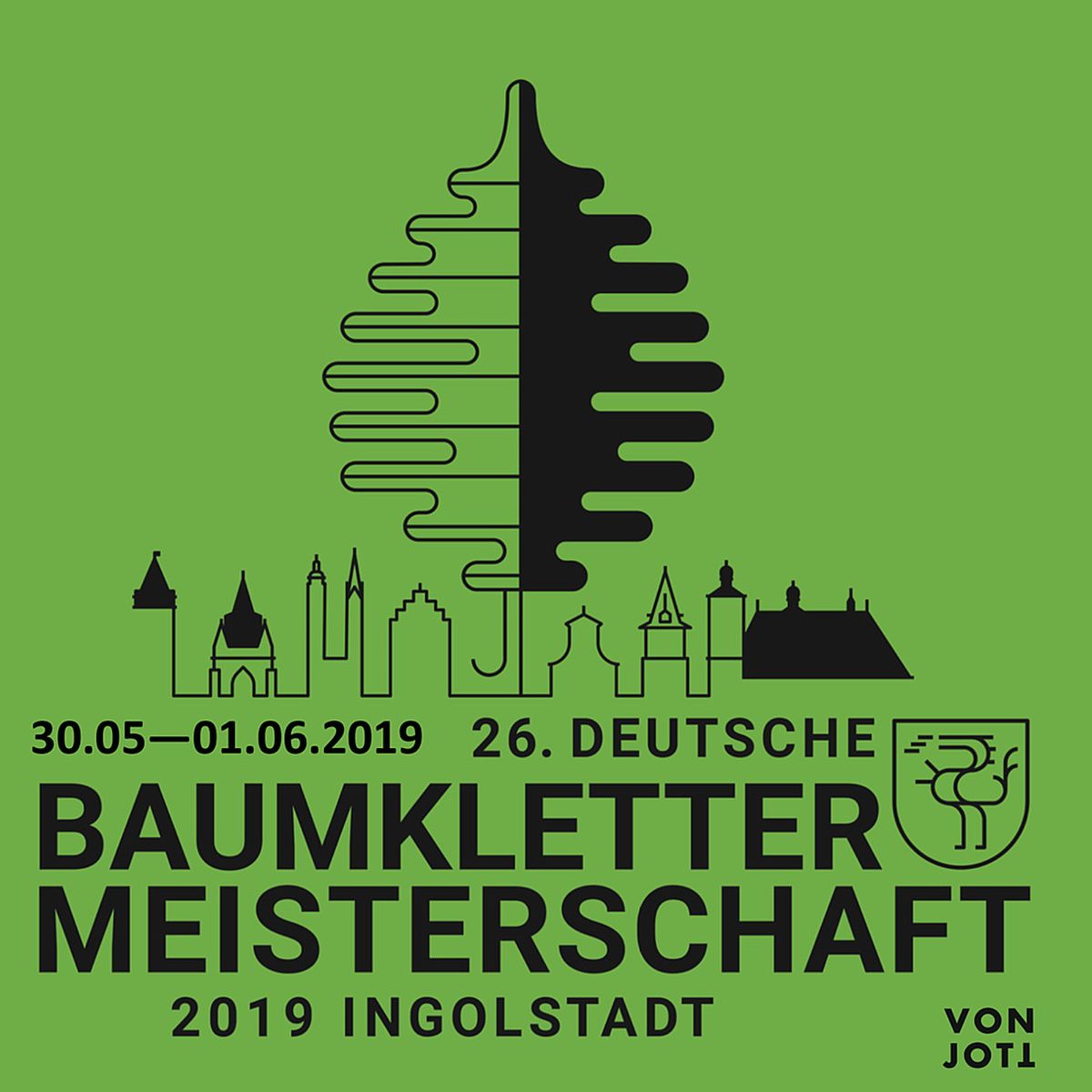 Also this year the German Championships started with the Gear Check on Thursday (always on Ascension Day a German holiday) and on Friday the preliminaries followed. However, after the Masters for men and women had been spread over Saturday and Sunday in the past years, the organizers put both on Saturday this year. For participants, jury and helpers, this meant starting early for the preliminaries and avoiding any delays.

Along the shore of the lake the stations of the different disciplines and the stands of the sponsors were located. The focus was on the classic spectator magnets Rescue and Work Climb. The tricky rescue scenario, in which the person to be rescued is fixed in a traverse, was mastered by less than half of the starters in the short time of six and a half minutes. Delays at the beginning of the competition day and the generally long rescue procedures caused two of the ten participant groups to sit in detention. They did not face the challenge until early Saturday. 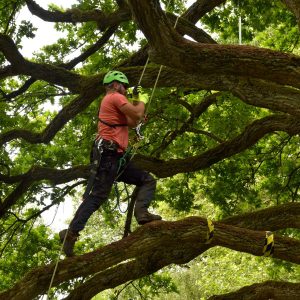 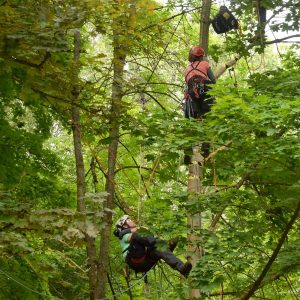 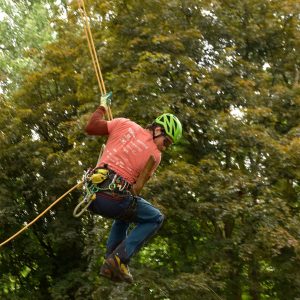 On the other hand, significantly more starters covered the way down through the oak of the work climb within the given time slot. In the men’s category, James Kilpatrik prevailed in both disciplines. Lisa Suchhardt in the work climb and Eva-Maria Mauz in the rescue triumphed in the women’s event.

Until late Friday evening the throwline was also delayed. A poplar and a plane tree were the scenery, which in 2019 provided a lot of atmosphere. At the end of the day Felix Funke and the Spaniard Vanessa Tilan Fernandez decided the not so easy station for themselves. She was one of eight international starters at the German tree climbing championship.

Somewhat off the beaten track were the Ascent event and the Speedclimb. The former offered the climbers a fantastic view of the lake, which perhaps made the participants forget one or the other effort. The Ascent titles in 2019 went to Hanna Purps and Fabian Weber, both instructors at the Münchner Baumkletterschule. Eva-Maria Mauz and James Kilpatrick were the fastest at the tricky Speedclimb in Ingolstadt. 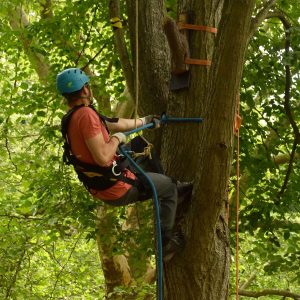 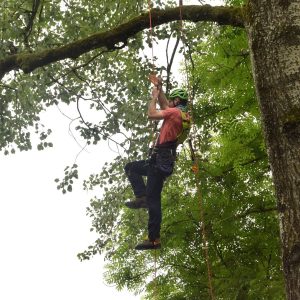 And who went to Masters?

In addition to the German Tree Climbing Champion of 2017, Eva-Maria Mauz, the two debutantes Hanna Purps and Lisa Suchhardt qualified for the women’s competition in all disciplines. They climbed a final at a German Tree Climbing Champion for the first time. In the men’s singles, Felix Funke and Wanja Malik were two “newcomers” to the Masters of the German Championships, too. Fabian Weber, Björn Lüdeke and James Kilpatrick completed the group. The latter was one of the starters who only completed the rescue course in the morning. Due to the delays, everyone went to the masters trees as soon as the results were announced.

The Masters of the German Tree Climbing Championships 2019 took place on two huge plane trees. A choice, which is not unproblematic by the dusts emanating from leaves and fruit of the tree sort. A possible oak tree fell out as a masters tree due to Oak processionary and for organisational reasons. Accordingly, the organizers provided protective masks and planned three drinking breaks for each participant. Even though none of the climbers used the offered masks, the additional strain was noticeable during and after the climbing.

Since the ladies climbed the same trees as the men this year, they only had to climb three of the four stations. Lisa was the first of the women to start her Masters, which she didn’t want to climb at first. At her first German Tree Climbing Championships she qualified for the first time for a Masters and her colleagues encouraged her to climb it also. And there was also the first round with the BigShot in the turkey oak. With a lot of practical tips from the audience it went from bell to bell and in the end a few seconds were missing to remove the ropes.

The second to start was Eva-Maria. Quickly the first station was reached before she chose a long way to climb to the next bell. With only six minutes on the clock, she reached the first of the last two stations, which she then worked through in a flash using a clever route selection. In the end, there was even enough time to remove the ropes while the spectators cheered. Hanna, who was visibly nervous, was the last to start her first Masters. With the climbing the nervousness disappeared and she reached all the bells and almost avoided the timeout.

After evaluation of the jury’s ratings, Eva-Maria Mauz was the new German Champion in tree climbing for the second time. Hanna, who was allowed to go to the European Championships in Rügen next to the German Champion, came in second, just ahead of Lisa, who finished third. 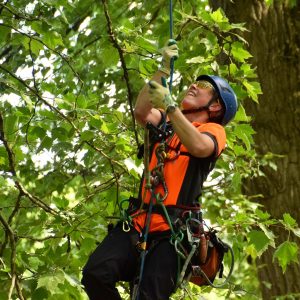 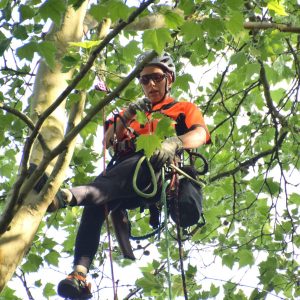 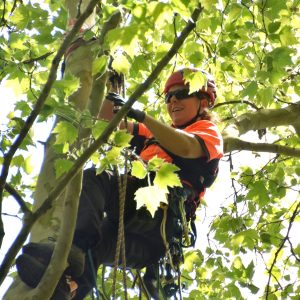 James and Fafa were the big favourites the spectators were waiting for. But first the debutant Wanja approached the trees. Calm and relaxed he installed his rope systems and climbed from station to station. At the end he was missing a few seconds to get his ropes out of the tree. Despite his experience with Masters and without it being immediately visible, Fafa was excited again this time. But as soon as the clock ran, he showed his strengths. He quickly installed his two ascent ropes. Then he quickly climbed up to the top of the tree and the bells. Even a failed pullback of the climbing system, which was to be seen more frequently in the Masters this year, did not stop the experienced masters climber from successfully carrying it out again in the second tree this time. 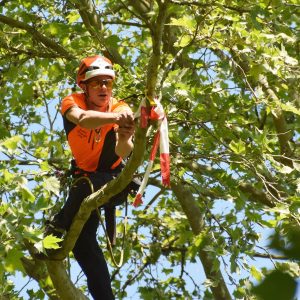 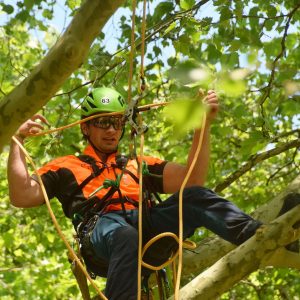 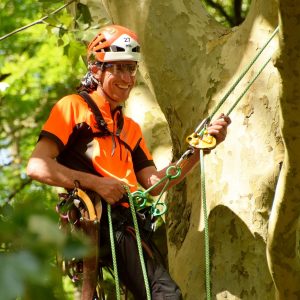 In his inimitably calm and determined manner, James was the third starter to show the audience how tree climbing looks almost perfect. Without any further ground contact he climbed down the bells on both trees without a hint of hecticness or effort. After he had removed the ropes without time stress and packed them neatly into the rope bags, it was almost certain when the victory in the Masters would come.

Bad luck for the fourth starter Björn. Early on he had to accept an admonishment from the jury when installing the ropes. He then climbed smoothly station after station and glided through the trees before he had another mishap at the last bell. He released Lanyard too early, which resulted in another warning and automatic disqualification. When the sun was already low, the last starter entered the masters ring. Also for Felix it was the first Masters at a German Tree Climbing Championship. Similar to James, he climbed into the tree with a climbing rope and climbed all the bells with his climbing system. The high effort to change the anchor point several times and the small ascents in between cost too much time. He just reached the ground before the given climbing time of 35 minutes was reached.

James Kilpatrick, who started for New Zealand, won the Masters at the German Tree Climbing Championships with an enormously strong 265.3 points. Fabian Weber, who also celebrated his first German championship title like Eva-Maria in 2017, became second and thus the new German champion in 2019. Felix Funke and Björn Lüdeke will also go to Rügen, as Wanja Malik, who is fourth, cannot participate in the European Tree Climbing Championships due to scheduling reasons. 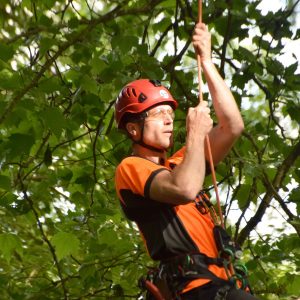 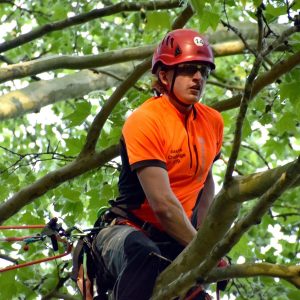 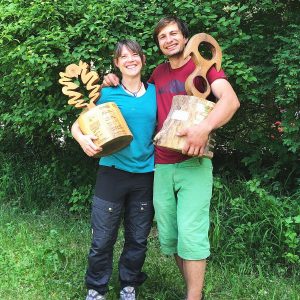 Of course there is a lot to report from Ingolstadt besides tree climbing. Lukas Winterer had the best eyes and expertise for the twelfth time in the visual tree inspection competition. Bernhard Schütte from the Münchner Baumkletterschule led through the Masters with his usual knowledge and humour. The organization had succeeded except for the usual small things and the weather was not too hot and except for a few drops on Friday dry. The big thanks go to all the helpers, volunteers and of course the participants who, with a lot of passion and perseverance, make a tree climbing championship what it is!

Unfortunately the mood in 2019 was a little hazy on both days and only a few guests from the scene or random spectators visited the championship. Seldom a strong applause or an enthusiastic cheering storm sloshed over the grounds. Perhaps the prospect of a cooling swim in the lake was too tempting?