The International Tree Climbing Championship has been firmly in New Zealands hands for the last five years. Seven of the ten titles in both men’s and women’s competition went to the small country on the other side of the world. And also in 2018 the Kiwis secured at least one of the two titles. The international climbing scene met this year in Columbus in the US state of Ohio for the ITCC 2018.

Biggest number of starters since the championships started

A total of 75 participants travelled to the northeast of the USA from 21 countries all around the globe on the first weekend in August. Never before have so many tree climbers participated in the International Tree Climibing Championship. In the large field of competitors of the 42nd edition were 26 female starters. Also a new record number for the World Championship in tree climbing. Being close to home seems to have inspired the Canadian participants in 2018. Two starters from the country with the sugar maple leaf on the flag – Krista Strating and Marilou Dussault – qualified for the big Masters on Sunday. The current European Champion Josephine Hedger and the New Zealand World Champion of 2017, Chrissy Spence, completed the starting field for the finals.

The women’s preliminaries won five different starters. Except for the Work Climb, where Chrissy Spence won by a clear 20 points, the medal winners in Aerial Rescue, Speed Climb, Ascent Event and Throwline were close together.

In the finals, the North American tree climbing champion of 2017, Krista Strating, prevailed. She is the second World Champion from Canada after Wenda Li in 2002. Chrissy Spence and Josephine Hedger follow her in the places. 49 men competed in the ITCC 2018. James Kilpatrick, the world champion of the past two years, entered the preliminaries as the big favourite for the title. With his smooth and effortless climbing style, the New Zealander made it clear in the preliminaries that he will be hard to beat at the International Tree Climibing Championship in Columbus. He won the two central disciplines Rescue and Work Climb and finished third in the often co-deciding Throwline discipline.

The reigning world champion moved into the Masters with a lead of almost 20 points. The following places were much tighter. Especially between fourth and eleventh place were only a few points in the fight for the desired starting positions in the Masters. These went with Craig Wilson to another New Zealander, the British Michael Curwen, the American Jeff Inman and the European Champion from Sweden Johan Pihl.

James stays ahead at ITCC 2018

In the finals, James Kilpatrick emphasized his good form and confidently won his third title in a row at the International Tree Climbing Championship. Only nine-time world champion Bernd Strasser won three World Championship titles in a row at the beginning of the millennium. Jeff Inman climbed to second place and Johan Pihl took third place. 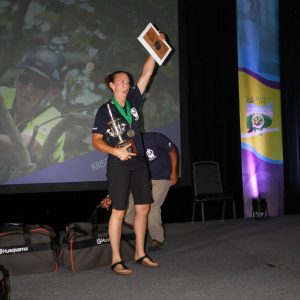 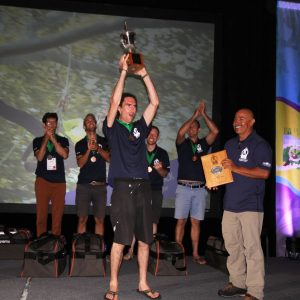 Freeworker congratulates the two world champions and everyone who made it to Columbus with their performances at one of the many national and international championships. All the starters on site showed in an impressive way the high level of modern tree climbing worldwide.