Six years ago, Petzl established the RopeTrip, an international event for rope access technicians. Meanwhile it is considered in the scene as an unofficial world championship. In addition to the competition, the worldwide professional exchange of knowledge and technology in rope climbing – similar to the national and international tree climbing championships – is in the spotlight. Teams from all over the world meet every two years to demonstrate their talent and skills in various tasks.

This was the first time that Petzl selected a location in Germany for the RopeTrip in its fourth edition. The organisers opened the base camp from June 7 to 9 in a disused steel mill that has meanwhile converted into a landscape park and industrial monument by the city of Duisburg. The comparatively young professional industrial climbing met the rusty charm of the Ruhr area. 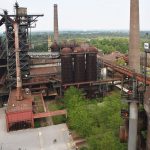 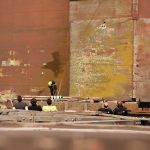 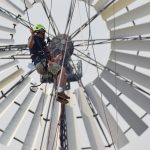 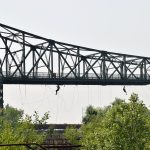 Great interest in the Petzl RopeTrip

So that nobody has to climb in the darkness, the field of participants is limited to 40 teams of three persons each. Within two days the few starting places were fully booked by teams from across the world. Some teams qualified on national preliminaries. Whether from Europe, Asia or South and North America, the Petzl RopeTrip is a popular destination for industrial climbers. Climbers from different nations can also join together in a team. For the first time there was a pure women’s team in 2018.

The event is built up from a pre-round with four stations. Each team member climbs three stations alone. Useful tips from outside by the other team members are of course allowed. The fourth stage is climbed together by the team members and the points are awarded for their joint performance. Since the stations are all challenging and time-consuming, the preliminaries extend over three days. At the end of the last day, the four best teams will enter the Head-to-Head semi-final before the remaining two teams determine the winner in the grand final.

In addition, the Petzl RopeTrip features a climb up race in which the fastest climbers are being sought. The fastest up and down were Dimitriy Nabatchikov (Russia) and Cintia Gobo (Brazil). As in other climbing competitions, there is the well-known gear check before the competition. In addition, all participants must show in a short skill check that they can pass the tasks set. A symposium with various speakers and topics related to rope climbing technology accompanies the sporting competitions.

The most spectacular station in Duisburg was the Water Bucket Challenge. The climber took a full bucket of water, which was attached to his harness with a rope, onto a demanding course. In Duisburg, its highest point was at the top of a 70 meter high furnace. Afterwards the climbers went over a traverse to the neighbouring building and from there back to the start.

The aim is to lose as little water as possible when climbing the track. But watch out, the time is limited. After 20 minutes of climbing, only 140 millilitres of twelve litres of water had spilled out of the bucket of the winner Antoine Quidoz from France. 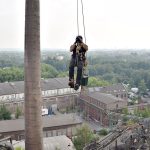 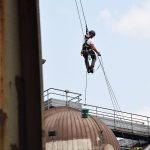 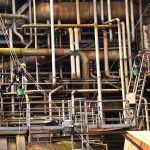 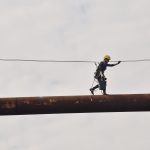 The perfect mix of precise, clean climbing and speed was required. The participants did not constantly float on the rope – they also had to climb over ladders, pipes or other obstacles. Since the furnace to be climbed is now an observation tower, visitors and participants were able to observe the climbers at close range.

Targeted spillage – in the coal bunker

The former coal bunker of the steelworks and today a climbing park for hobby athletes was the scenery for another station. The targeted positioning of an object in space by means of different rope pull systems is taken directly from the everyday work of the industrial climber. All tasks of the Petzl RopeTrip are adapted to the daily life of professional climbers.

After an iron barrel had been filled with enough split, the climber went into the wall. There hung the ropes with which he had to manoeuvre and empty the 70 to 80 kilogram ton via a detour to the target. Only the split, which trickled through a small hole into the finish area, counted for the ranking. The scales showed almost 69 kilos for the best of the station, Dimitriy Nabatchikov from Russia. Other participants also achieved similar values. 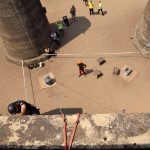 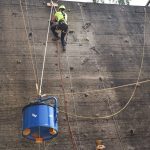 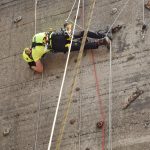 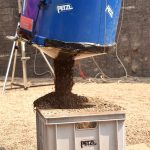 A giant crocodile and billiards high above

Quick and safe traversing was the motto of the “Crocodile” station, an old gigantic loading crane. As at other stations of the Petzl RopeTrip, two participants climbed in parallel. After the ascent up to the old iron it was necessary to climb the path from about 20 metres below the outrigger over loops and rope strands to the descent. For the climber, this meant constantly changing the rope, swinging to the next rope, estimating distances and climbing up again briefly. The time stopped when the ground was reached. The fastest – Mikhail Rafikov from Russia – took 7:19 minutes.

Directly at the base camp under the roof of the old casting bay was the only station that the teams climbed together. The French experts, who had previously set up all stations of the Petzl RopeTrips, had pulled two billiard tables up to 10 metres. The task for the teams: all pucks (the “tables” were too wobbly for balls) must be pocketed. That meant climbing up quickly and repositioning yourself again and again with ropes so that the 15 pucks could be sunk cleanly with the cue. The time limit of 45 minutes, which initially sounded like a lot of time, was still too tight for many teams. Only seven teams managed to sink all the pucks. 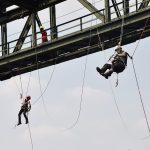 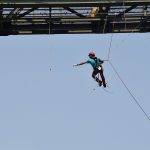 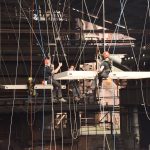 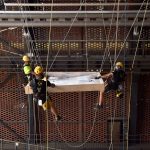 After all climbers or teams had completed each station once, the participants of the semi-final were determined. Two teams from Russia and one team each from Canada and France scored the most points. The German teams finished in places 19, 28 and 31, the only team from Austria claimed 18th place and the Swiss teams 21st and 27th.

A rusty steel frame with a wind turbine at the top was the scene of the semi-final. As a scenario, the organizers chose to rescue three injured people from different situations. In the soft mood of the evening light, two teams climbed off at the same time. Whoever had all three injuries on the ground first was in the final. 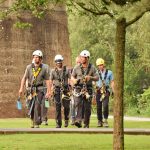 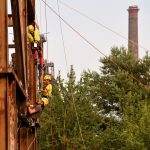 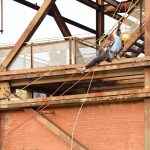 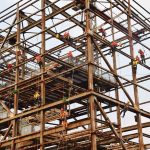 In the first semi-final, the French team Astros’s clearly beat Evpator Moscow. But a big mistake – a Frenchman was simply secured for two seconds – meant disqualification. The second semi-final between RAT from Canada and JEDI from Russia went to the North Americans.

The Russian winners of the first semi-final, however, renounced the final due to the circumstances of the victory. After long discussions, the jury and the four semi-final teams decided that the winners of the second semi-final – Team RAT – are the winners of the Petzl RopeTrip 2018. At the end, a show final followed, in which all four semi-finalists participated and worked together in two teams. In the big hall, where the great party started afterwards, the now 6-man teams completely dismantled the two billiard tables within a few minutes.

The winners of the Petzl RopeTrip 2018: RAT from Canada. © Petzl / Lafouche

The Petzl RopeTrip – a rewarding journey!

A look beyond one’s own nose is rarely harmful. Even if industrial climbers and tree climbers are sometimes far apart in their respective techniques and tasks, a look at one’s colleagues can still be an advantage. Among the 120 climbers was at least one tree climber from Germany who set himself the task. And in the audience one or the other interested spectator with “green climbing background” could be recognized. Even if the Petzl RopeTrip 2020 will probably not take place in Germany, the event – whether as a spectator or participant – is certainly also interesting for arborists. As mentioned, a look out of the treetop can’t hurt.