Just before the award ceremony began at the European Tree Climbing Championship 2018, something unusual happened: raindrops fell to the ground for a short time. Previously, the weather in Thoiry, a few kilometres west of Paris, was dominated by heat that increased daily. On the last day the thermometer climbs to 35 °C and the heat demanded the last forces from the participants of the Masters. In the men’s final, a French arborist took the home advantage and the grandiose support of the French fans. In the women’s class, the series winner of the last years was once again unbeatable.

Fitting for the savannah-like weather, a safari park and zoo on the estate of an old country castle were the scenery for the ETCC 2018. Dealers and manufacturers had pitched their tents around the large central meadow. The individual stations of the preliminaries were to be found directly in the trees behind it. A total of 59 starters from 19 nations took part. These starting positions were divided between 46 men and 13 women.

The two oaks chosen by the organisers of the European Tree Climbing Championship 2018 for the throwing in of the throw line were tricky. Only a few starters get two-digit scores. German participants prevailed in both the womens and mens competitions. 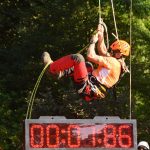 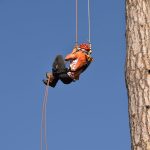 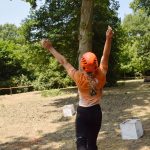 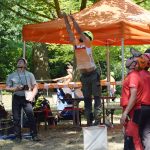 A deeply twisted oak tree was the setting of the Work Climb. Classically, four stations with bells, weight and throwing station had to be processed and finally a clean landing had to be made. Once again Fafa Weber showed his strengths with his elegant and fast technique and was unbeatable with 76.05 points. In the womens competition Josephine Hedger was ahead with 66.87 points. 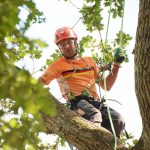 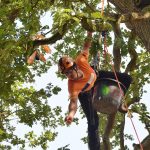 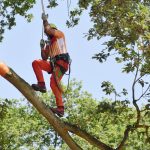 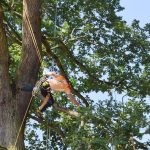 In the shadow of Lebanon cedars and sequoia trees, the rescue was one of the most popular stations for the spectators. Despite isolated linguistic obstacles due to the large number of participating nations, there were numerous excellent rescues to marvel at. In the womens competition, the British athlete Jospehine Hedger showed the best solution with 39.33 points. Frits Van der Werff won the mens competition with 43 points.

Right next to the rescue station everything was prepared for the Speed Climb. Before the thick trunk of the mighty Lebanon cedar had to be climbed up about 25 metres, the starters first had to climb a few metres across a thick branch close to the ground. The two French climbers Jèrôme Pagny with 34.23 seconds and Sophie Valat with 90.71 seconds were the best. 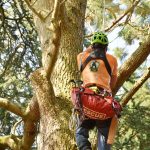 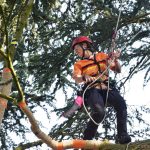 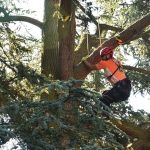 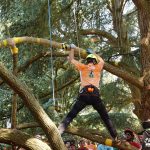 Even in the early morning – before the first starter was on its way to the Masters tree – the sun had already heated up the air properly. The few shadow seats were quickly occupied by spectators. Master tents and other shade givers were dragged in from all corners. The evening before, the organisers announced the participants for the Masters. Josephine Hedger 🇬🇧, Erika Luppi 🇮🇹 and Sophie Valat 🇫🇷 qualified for the women. They alternated with the five men Fafa Weber 🇩🇪, Romain Chignardet 🇫🇷, Jérôme Pagny 🇫🇷, Miguel Lillo 🇪🇸 and Frits van der Werff 🇧🇪 on Sunday at the European Tree Climbing Championship 2018.

The Masters tree was well known to the starters. They climbed it the day before during the Workclimb. Of course, the course builders of the European Tree Climbing Championship 2018 moved the individual stations. The weight station was even placed on the neighbouring tree, for example. But already with the first starter it was clear that this could be achieved by redirecting over the main tree. The time limit was 30 minutes. A demanding task in view of the temperatures.

After the first two men had completed their Masters run, Josephine started as the first woman in the Masters. The three-time World and European champion pulled the throw line long but concentrated into the anchor point like a puppeteer until the jury was satisfied. It was not possible to catch up the lost time and after three stations the defending champion reached the ground again completely exhausted. There she was missing a few seconds to completely remove her equipment. 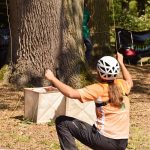 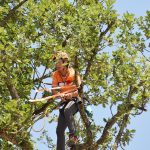 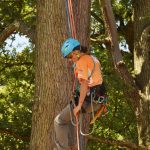 The other two starters had even less time to climb. Both Sophie and Erika had to struggle with the rope installation for a long time and finally ascended into the tree after more than half the time. Under time pressure, they both made unfortunate mistakes, which led to disqualification. Erika lost part of her equipment, while Sophie’s rope angle and a slack rope left the jury with no choice.

Frits from Belgium was the first to enter the Masters tree. He quickly installed his system and also worked through the stations very fast. He even had enough time to remove a rope caught in the branches by a new ascent and under the thunderous cheering of the spectators. With 19 seconds left on the clock he was finished with his performance – he was the only starter that day in time.

He was followed by Fafa from Germany. His plan was to install two ascent ropes. A bit of bad luck while throwing cost him a lot of time and meant enormous time pressure in the tree. Back on the ground, there was little time left to remove the gear. A penalty cost him additional points.

Next in line was the first French starter. Romain installed safely and quickly and climbed down the individual stations in a clean and concentrated manner. The audience supported him to the best of their ability by shouting the famous “Allez ! Allez!” A few seconds before the end of the time he pulled his last rope over the anchor point. But this fell unhappily into the middle of the two meter high fork. Romain was missing three seconds in the end. 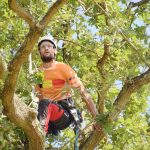 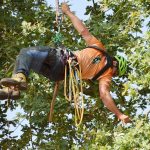 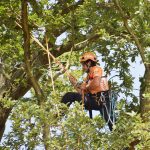 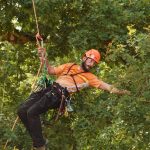 After Sophie the third starter from France followed. The two-time French champion Jérôme also needed a lot of time for the rope installation. After three stops and with three minutes left on the clock, he lacked the strength to climb to the fourth stop. He therefore abseiled himself and removed his system in time.

Last starter was Miguel from Spain. It took him almost two-thirds of the time to throw in. It was simply not possible for him to make a successful throw. In the remaining time he managed three stations before he began with the removal. Unfortunately, his water bottle loosened and crashed to the ground. Disqualification was the result.

Due to the two disqualifications it was clear after the last starter that Josphine Hedger defended her title. It was more exciting with the men. Opinions were divided as to who would win and who would make it onto the podium in third place. Fafa was all the more thrilled when he celebrated his first podium finish at a European Championship. With the announcement of second place to Frits, the cheers of the numerous French people on the spot knew no bounds. Because now it was clear: Romain Chignardet is the new European champion in tree climbing. 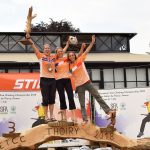 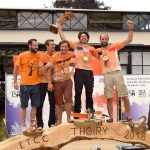 A special honor, the “Spirit of the Competition” award, went to Florim Ajda, who is popular in the scene. With his friendly and informative moderation of the championship in many languages, he made a crucial impact on the great atmosphere on all days. Nevertheless, it is desirable for future championships that the atmosphere at the womens Masters will be similar to that of the men. Unfortunately, many spectators used the womens Masters races for a break.

At the very end and almost lost in the hustle and bustle of the celebrating winners, was the message of the President of ISA Germany. Jan von Hofmann announced the location of the European championship 2019, when the best climbers from Europe will meet on the island of Rügen in Germany. Freeworker will be on site and hopes that many local climbers – and of course guests from all over the world – will take the chance to see tree climbing at the highest level. And perhaps, with their strong support, the local climbers will once again be able to take the home advantage.